Maybe you’ve decided to explore a little further down Stave’s amazing design library and venture into some new types of puzzles. Perhaps you’ve done a lot of Teasers or Tricks and would like to try out something a little different, whatever the reason, we are going to delve into the world of Tormentor puzzles and help unpack these unique designs in this next installment of our Stave Puzzles 101 series.

First, if you haven’t had a chance to read our previous posts on Teasers and Tricks, you may want to do that as they are both chock full of pictures and hints to solving these innovative puzzles. Now on to Tormentors… 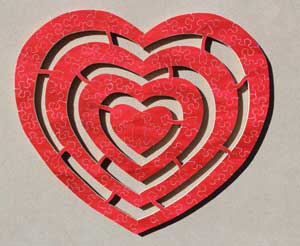 Tormentor puzzles have a design style that has been around for quite some time, although they were not always called Tormentors. Tormentors are best described as really hard Traditional puzzles. They have a lot of the features of some Traditionals and really feel like a whole bunch were stuffed all into one moderately sized puzzle. Don’t be fooled by the piece count, these are as hard as it gets without heading into Tricks or Teasers. A lot of trial and error to fit pieces together are in order to solve these!

Probably one of the most well known Tormentors is called “See the Rain Dear”. This is a classic holiday puzzle that Stave has been selling for many, many years and remains a popular choice for puzzle buyers.

It also is a great one for a little “case study” of the features of Tormentors.

Often these style puzzles are circular, but they do come in other shapes as we’ll show in a minute. Several features make them particularly hard:

From a design perspective, they are some amazing puzzles, and many of them tell a story, in a sense. There are 3 major design styles we have self-identified with Tormentors. For purposes of this blog post we calling them “Story/Action Puzzles”, “Animal Faces Puzzles” and “Flat Out Hard Puzzles”

“See the Rain Dear”, aside from a great play on words is a perfect example of this category. Plain and simple, the completed puzzle, through the use of dropouts, tells a story. 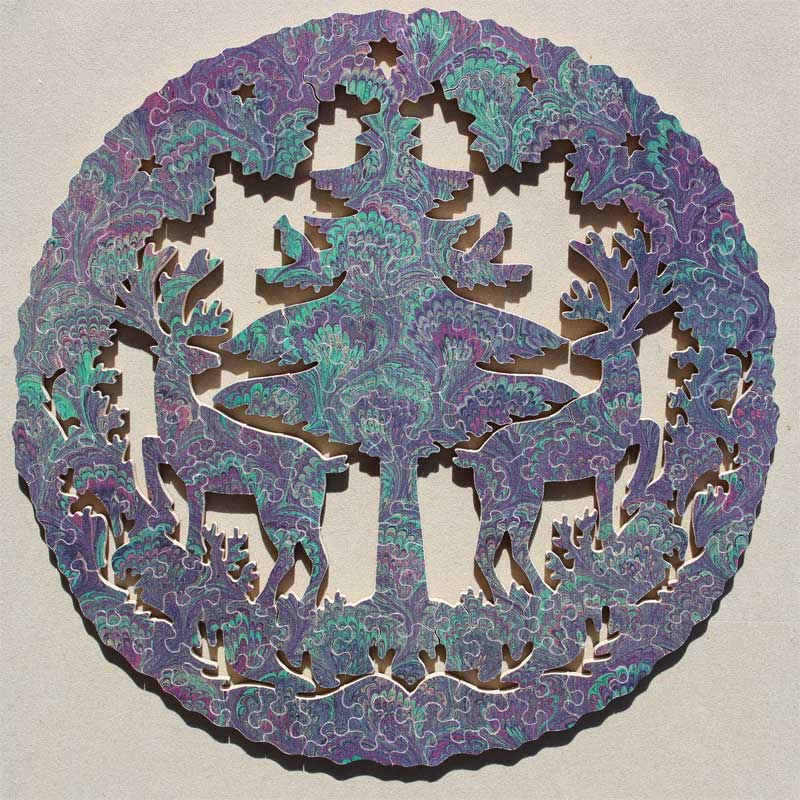 Here’s a great example of what we are talking about from a retired design called “Peter and the Wolf”. Even if you aren’t familiar with the fairy tale, the silhouette of the completed puzzle conveys a lot about the 2 characters interaction in a fantastic cut, so telling a brief story through design. 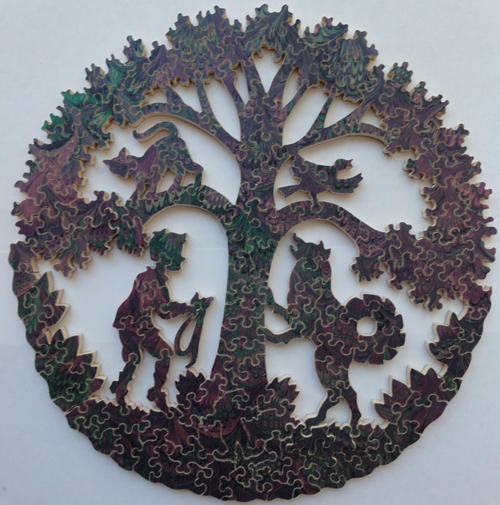 “Peter and The Wolf”


“Easter Egg” is another good example of a creative design which is a little easier due to the fact that it does have some color variation across the pieces. If you are new to Tormentors, you may want to consider one with multiple colors as they are easier to do. 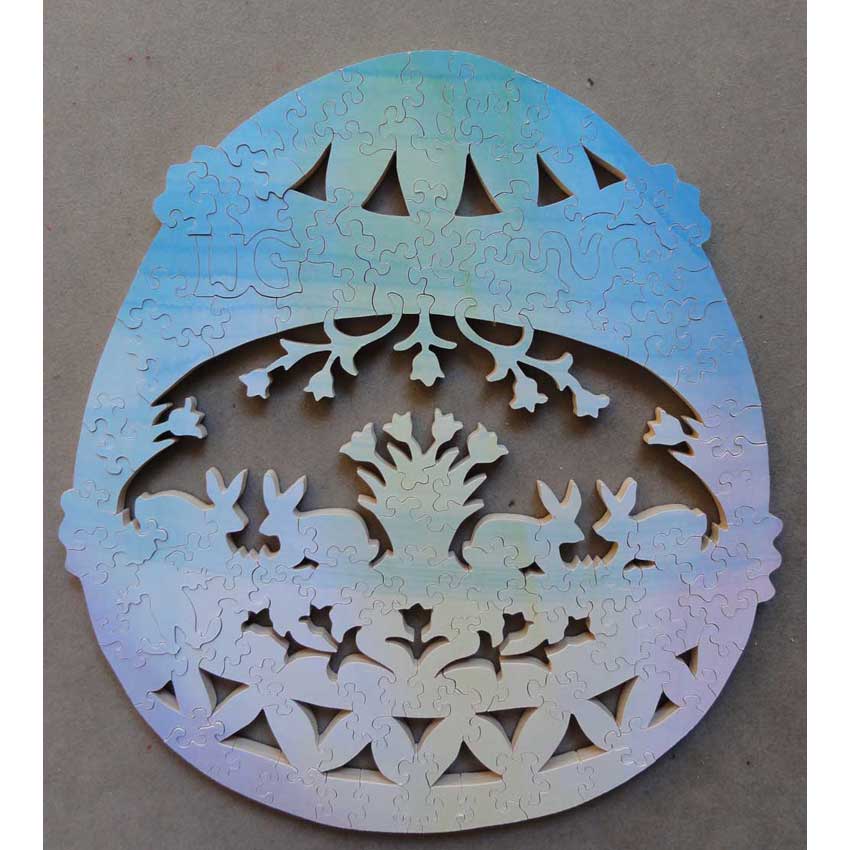 “Easter Egg”
A little Stave trivia, this design is over 30 years old and originally was called “Egg and I”. The current version is a lot more colorful than this one which is from 1991.


Another version of a multi-color puzzle in this style is “Wading for You”, another fun one to get your feet wet in the world of Tormentors (really bad pun intended!). 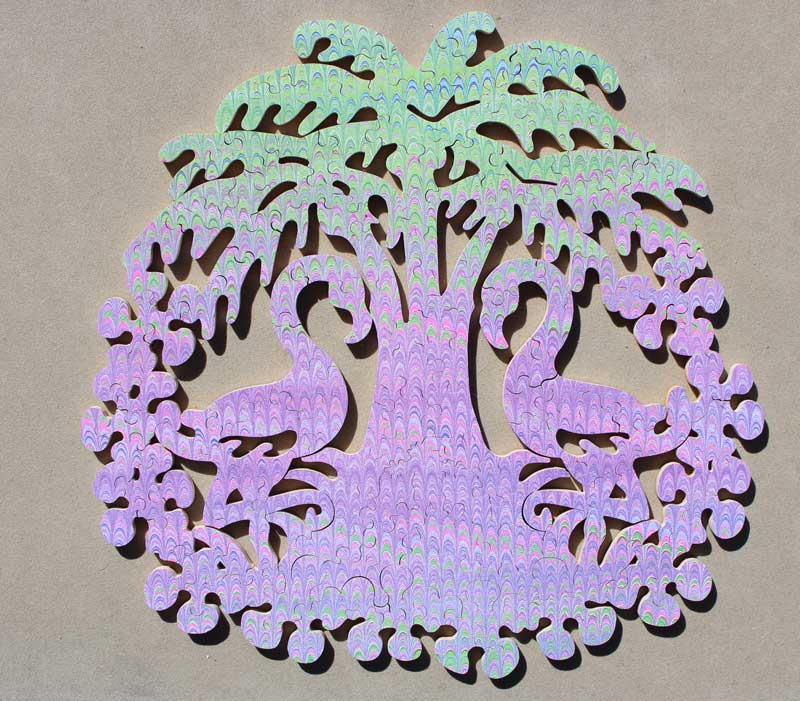 These are some of Stave’s newest designs and are quickly becoming some of their most popular. What makes these different from other Tormentors is the pieces are each individually colored with one color. As you assemble the puzzle the various shading comes together to create an image of an animal’s face. Sort of like the puzzle version of paint by number, just 1000 times harder! The most well known of these is called The Mane Event and, aside from the fantastic title, should keep you busy for some time. 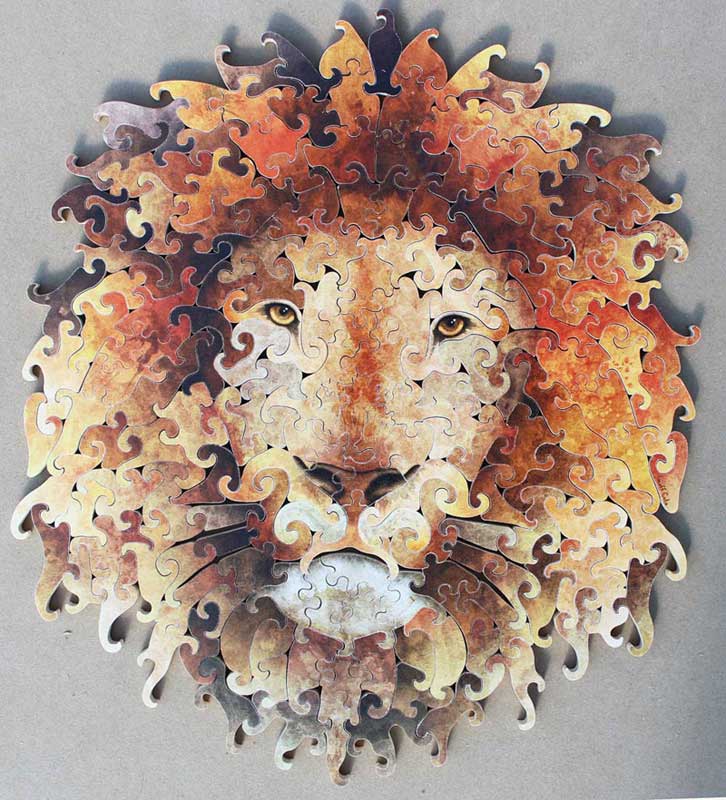 The last category we’ve come up for these are just what the title says! Here are 2 examples:

Fan Flair is part of a series of a few puzzles with a similar design based on different fans. This puzzle is very large for a Tormentor, with about 250 pieces and the size made it extremely difficult. Essentially one color, very difficult swirling dropouts from the dragon design and other elements made this one for the record books in terms of time per piece to solve! 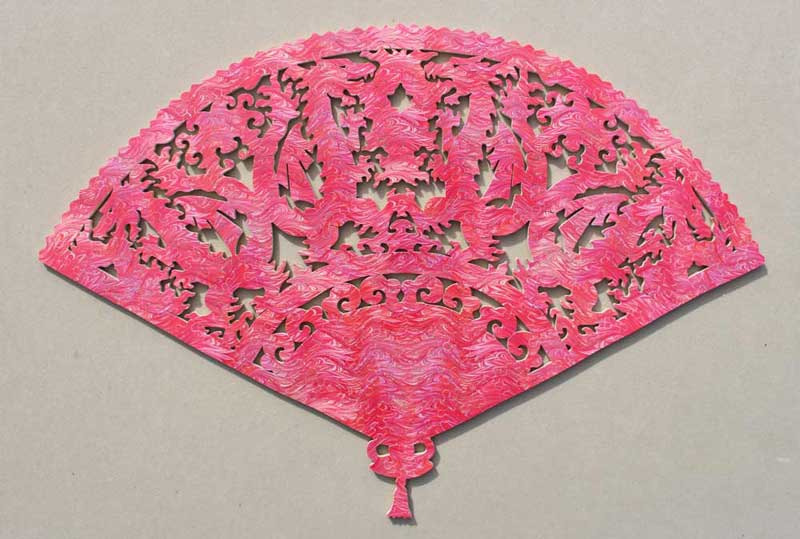 
If you’d like to be challenged, but not quite that much, you may want to start with a smaller one. We also enjoyed this one called Love Entwined. It was a bit easier than Fan Flair (although we’d never say it was easy) as well, due to the size and the fact that there is a lot of symmetry to the puzzle. So once you have one part done on one side, you can find similar pieces and somewhat copy the other side, although it doesn’t work 100% of the time (that’s a little hint for you!) 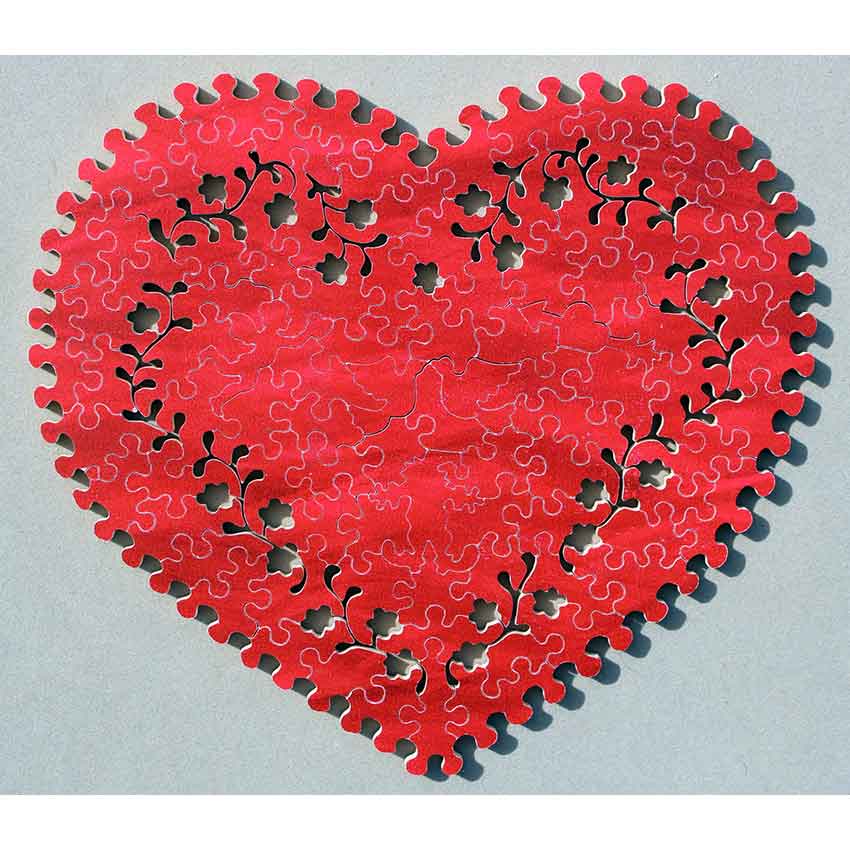 There is also a Snowflake series that Stave has been doing for many years that has a nice selection of slightly easier puzzles. They consist of all sorts of snowflake designs and they tend to be around 100 pieces, so a little more manageable.

So we’ve given you a short overview of what Tormentors are. As with many of Stave’s innovative design categories, there are quite a few styles to suit in any puzzler’s taste. Good luck with these, you should expect some long puzzling sessions to get through them, but when they are complete, you will no doubt be proud of yourself!