Oh where oh where do we start with this? Historically Tricks have been some of the hardest puzzles Stave makes. However, in recent years, this has changed with some new, even harder types of puzzle designs including Troublemakers that often have multiple solutions or another category called Tormentors that are also becoming more popular. For this article, let’s keep things simple and stick with Tricks as they have been around for some time and often the next step up in your Stave challenge journey if you feel you have mastered the art of solving Teasers.

So first, what exactly is a Trick puzzle? Well, in its most pure form it is a puzzle that has pieces that fit together in multiple ways. So one piece could potentially connect with several others. However, when you get close to what you think is that aha moment and solving it, there is a leftover piece or a gap that doesn’t look right or some other hint that there was some mistake and time to go back to the drawing board. Usually this will require a cooling off period involving a walk around the block or possibly a sip of your favorite beverage. 😉 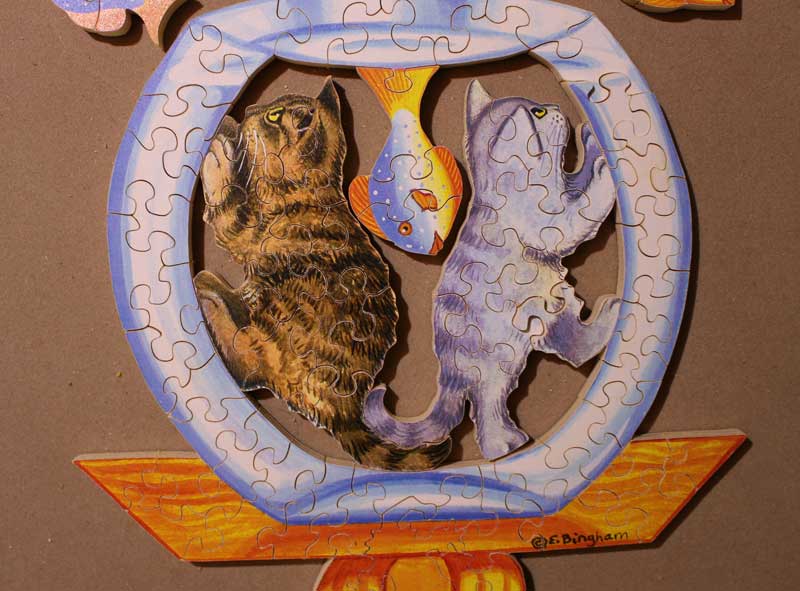 Are you a Champion?

In the “World of Trick”, there are a couple that stand out as being the most well known. Champ is one of them. This is a classic that every Stave Trick collector should have in their collection. It’s only 44 pieces, but you’ll quickly learn to not just a trick by its size. These are 44 pieces that take lot of thinking to solve. Take a look at the photos to see what we mean. If you look closely, and it’s a little hard to do in pictures, but you can see that many of the pieces have the same size knobs, so will fit into multiple ways. In fact, Stave says there are 32 possible ways this puzzle can be solved, but only 1 correctly

Here’s a funny story about this puzzle. This was the very first Trick we did. By a complete stroke of luck we solved 1 of the 2 solutions in about 20 minutes. It was literally by chance as we happened to grab the pieces in the right order. We really didn’t know what all the fuss was about. Well, then we tried the second solution and were stumped. Our suspicions were confirmed the next time we did Champ it took a very long time to solve! So, maybe you’ll have beginner’s luck with your first Trick too, but don’t count on it! 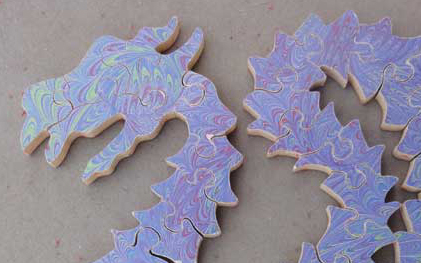 “Champ” – We don’t want to reveal the solution, but if you look closely at the knobs you can see how multiple pieces fit together with each other

The other very well known Trick is Olivia, which came out in 1995. Despite only being a bit over 200 pieces, it has 10,000 possible ways the pieces can fit together, yet, again, only 1 correct solution! As the story goes, the puzzle was so hard, Stave gave away a free lobster to the first 50 people that could solve it. They even had a large prize when it was released during a live puzzle solving contest within a set amount of time. Someone almost did win the price, but was off by just a few minutes.

A Tricky Guide To Tricky Tricks

There are actually different types of Trick puzzles, beyond just “regular” pieces fitting together with multiple pieces.

Traditional Tricks
These are pieces that look like traditional puzzle pieces but will fit together in multiple ways, such as Champ’s piece design mentioned previously. 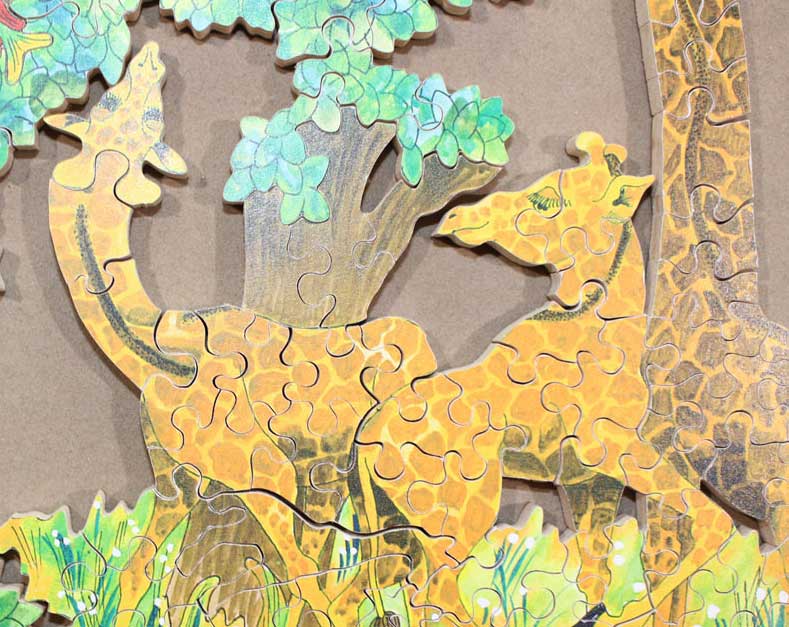 “Neck and Neck and Neck” – Notice how the pieces in the neck are designed in a way to connect with more than 1 piece. This is a classic Trick design.

Monkey Fist Tricks
These come in variations, but are very hard. They don’t have a fit that you normally would expect since there is a lot of play in the connection. As a result, you don’t really know if it’s correct until you are further along in the puzzle. These are very tough. 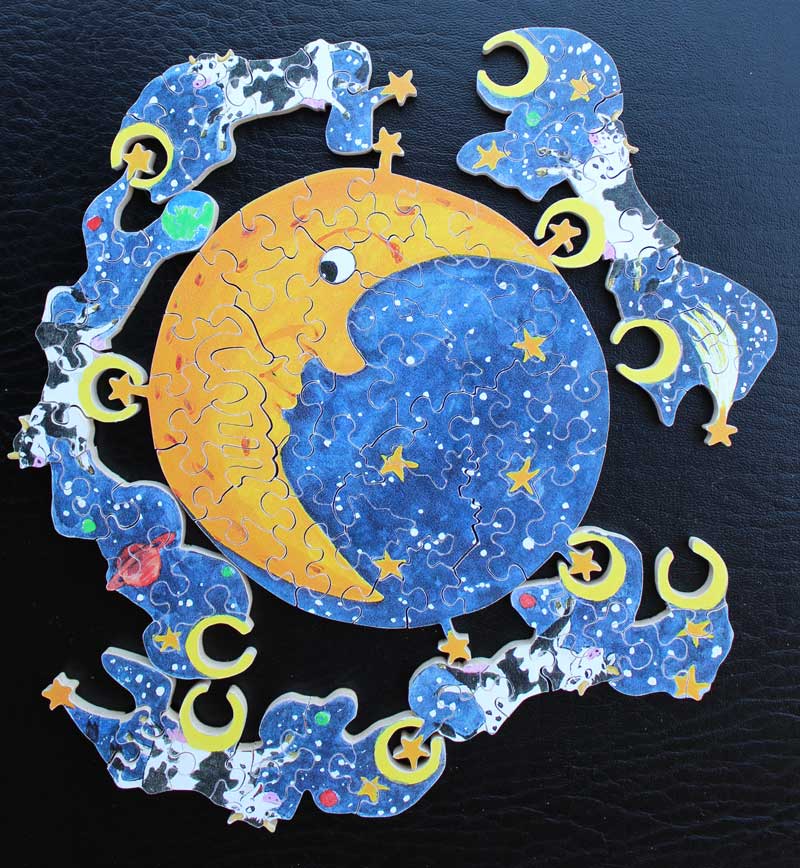 Crazy Claw Tricks
These are also extremely hard. You don’t really know if it’s correct until you have completed a fair amount of the puzzle due to the wiggle room you have. 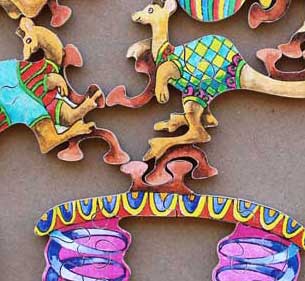 “Square” Style
These square shaped pieces require you to make them fit into a frame. Similar to Teasers in some ways, much, much harder given all the straight edges that give you little to go by. The larger they are the more possible options. 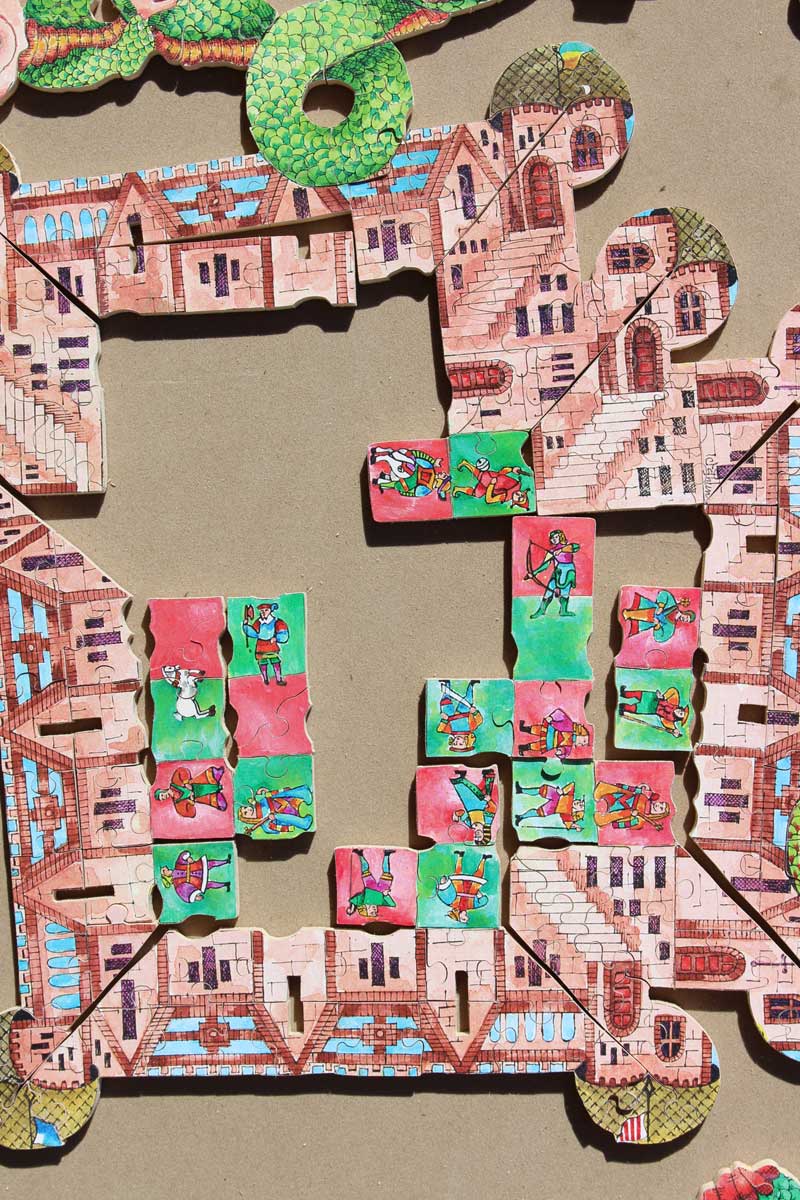 “Fred and Ginger” – The squares can together go in many ways